Naive Art is informal untutored art without imposed education. Naive artists are children at heart and they seek to touch the most basic of human needs – love, companionship, humour and adventure by childlike expression.

Is there a distinct characteristic to Irish naïve art? No. It has exactly the same joy, innocence and darkness so loved by the naïve artist. Naïve art is the art of storytelling, and some of these painters have imagination that supersedes any of the great traditional painters. Only sometime their colours are more subdued and less vivid compared to their Latin American or East European counterparts. This being of course a reflection of the rain blasted landscape that is Eire.

In Ireland there is an emotional force in the representation of the artist’s observations of rough weather, rural and maritime life. This is most obviously the case in the work of the late Gerard Dillon and the Dalkey artist, Brighid ‘Biddy’ Mc Laughlin. Despite the colours and placid looking figures, a darkness emerges from the sadness of their emotional life. The spirit of Dillon’s late brother and Mc Laughlin’s tragic past skate with us as we look at their stories. Their work, uninhibited, free, allows us to glimpse into their very soul…

Located in the Atlantic Ocean nine miles off the North Donegal coast, Tory Island is renowned for its school of primitive painters. One of the most rugged and sea swept Islands in Ireland, it captured the imagination of the late Derek Hill, an important artist from Southampton who visited the island in 1956. Hill’s presence made a huge impact on island life. Working form an isolated hut on the island he inspired locals to try their hand at painting. “I could do better myself,” declared islander James Dixon when he saw one of Hills works. Amused by the man’s bravado, Derek Hill handed him a paintbrush and the rest is history. Dixon’s paintings now sell at auction for between £6,000 and £10,000. The Dixon gallery in the late James Dixon’s former home now contains some of his pieces. It also features the work of Patsy Dan Mac Ruaidhri, (born 1945) a primitive painter, who plays an active role in promoting the island. With agriculture and tourism on the decline, their unique style of maritime naive art holds the key to the future of Tory island and its 155 inhabitants. Life has never been easy on Tory, this hardship- the storms, drownings, the battles, invasions, sea-wrecks,  the wild life and birds are all reflected in their canvases; Kittiwakes, razorbills and great black gulls rest on the enormous cliffs, islanders walk on an island so windswept that it is devoid of  trees. Tory island is now synonymous with the powerful imaginations of these great painters.

The mother of artist George Campbell, Gretta Bowen took up painting shortly before her seventieth birthday, using materials belonging to her second artist son, Arthur. A primitive of the Grandma Moses school, she was represented at the International naives Exhibition at the Hamilton’s Gallery, London in 1979. Using horizontal arrangements reminiscent of the Tory Island painters, she ignored  conventional linear perspective and painted lively, child like scenes of fairgrounds, ice-skating rinks,  dockside scenes all conveying a feeling of happiness and delight in life. 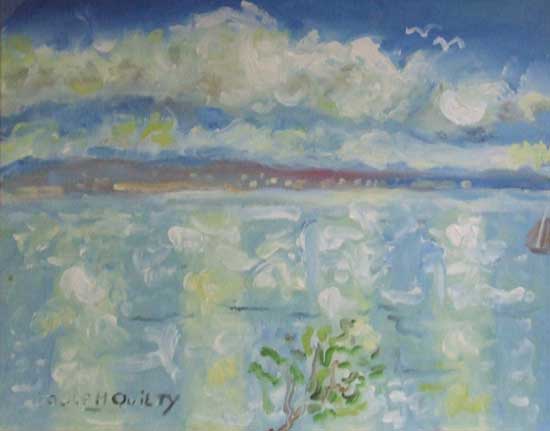 Joseph Quilty was born in Limerick on the 7th may 1914. As a young man who painted constantly, he emigrated to England where he studied at the Arthur Segal’s School of Art and painted with his friend, Gerard Dillon. The inspiration for much of his work was the Burren landscapes of Ireland’s West coast. His reputation as a painter was firmly established when he moved back to Ireland in 1978.his paintings have been exhibited in Galway, Dublin, London and Toronto and they hang in private collections in the U.S.A., Canada, Germany, France, Switzerland,  Spain, Britain and Ireland. Belfast artist Gerard Dillon worked as a house-painter and decorator in his youth. In 1939 he and a friend went on a cycling holiday in Connemara, an event which his biographer James White has since labelled” the most important development of his life”. Gerard Dillon: An Illustrated Biography. Wolfhound press, Dublin, 1994. Dillon’s landscapes are instantly recognizable, harbours, coves and fields dotted with stone walls.

Brighid “Biddy” McLaughlin has been a story teller all her life. Born in Dublin, she is a self taught artist who lives in Dalkey, the beautiful seaside village in south County Dublin. She works in her traditional cottage overlooking Dalkey Island and the sometimes treacherous stretch of water known as Dalkey Sound, where she fishes and rows her boat. She paints in a truly naïve style and her works depict Irish life and character as it was and is. In her painting she captures the tales of common and not so common folk caught up in the maelstrom of life.

“Naive Art is informal untutored art without imposed education. Naive artists are children at heart and they seek to touch the most basic of human needs – love, companionship, humour and adventure by childlike expression. The widely acknowledged international artist Michael Johnson said of Biddy’s art that “she will be one of Ireland’s great naive interpretive painters. Typical of Biddy’s unique style is the inversion of traditional tales where her animals are real but her people children. So through the innocent eye of childhood our world can be reborn every day.  ”The best storytelling always involves danger and suspense. Biddy doesn’t avoid danger. Dark elements often threaten and sometimes seem overwhelming but love of life wins through. In the “Kingdom of Innocence” good always triumphs over evil.  ”More than anything Biddy’s art is essentially about humour. Some years ago while walking down Ballybunion beach; a great artist of our time asked Biddy to refrains in mid-sentence from telling a story. He had, he said a stitch in his gut from laughing. “You know sometimes Brighid he cried, “Some people soar with the larks and wallow with the pigs, you soar with the pigs and wallow with the larks – pigs being endearing creatures of course!”
- John B Keane – Writer

“Quick and alive to events that frame our lives, responsive to love, and to rituals that bind people together, the paintings of  Brighid ‘Biddy’ Mc Laughlin are, at first glance, evocations of a world of blue skies, bright flowers and sparkling sea. However, beneath the surface, her images also speak of loss, and of danger. A blue sea is transformed by giant waves into an ocean of peril, with sharp-toothed killer whales swimming just below the surface. In many of her paintings a sinister black island rears up in the background, while an enigmatic red fox trots unconcernedly across a landscape, or leaps from a rowing boat. Mc Laughlin’s style draws from the world heritage of folk art, a heritage stretching from Minnesota to the Ukraine, art that inspired Andy Warhol. But her paintings evoke also the contemporary dystopian television world of South Park, with its quirky anxiety-ridden characters. Wide-eyed with dismay, McLaughlin’s people drift in boats on restless seas; fearful of what life may bring, they clutch each other for support. Hopeful for the future, they pledge themselves to one another. These paintings are naïve, but they are also sophisticated, reminiscent of the early work of Mick Mulcahy. Perhaps the strongest part of their sophistication is their clarity: these paintings can be read as easily by a child, as by an adult.”
- Peter Murray, Director of the Crawford Gallery, Cork